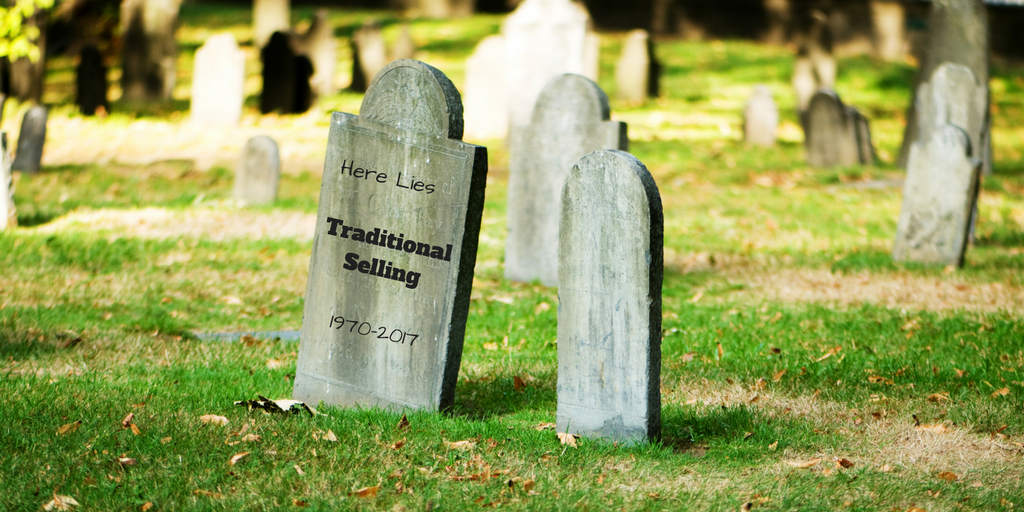 in its sleep last week. It had been in poor health as buyers tired of seller attempts to convince, persuade and overcome objections (many of which were valid). The demise of TS accelerated as websites, search engines and social networking were used to level the playing field with salespeople.

Today’s buyers research multiple vendors and their offerings prior to contacting salespeople. TS drifted further out of alignment with buyers as sellers continued to develop needs without learning requirements that had already been established. Buyers resented being treated as novices with sellers’ premature attempts to change their requirements. The death spiral for TS accelerated.

Futile measures were taken in the last decade to extend the life of TS. In a woefully tepid response, many vendors made a name change. The term “Sales Enablement” fooled no one. Some buyers were repulsed that vendors continued efforts to help salespeople sell. They ignored the reality that buyers want to buy – not be sold. “Buyer Empowerment” would have been a better name, but absent extensive organizational changes, status quo TS was not going to change appreciably. Bandages were being applied to a grievously ill patient in of need major surgery.

While buyers expected and welcomed the news, vendors clinging to old ways are saddened by the demise of TS. Many seem paralyzed by the prospect of having to rethink revenue generation with a blank sheet of paper. A good start would be redefining the role salespeople should play in today’s environment. Despite all the training they receive, sellers are no longer viewed as the product experts they were pre-Internet.

Stockholders of vendors clinging to old habits are concerned that failure to respond to new buying realities may lead them to suffer the same fate as TS. Top-line revenue growth has been elusive over the last 15 years, despite all the alleged buying activity that was happening. A sustainable competitive advantage awaits those vendors that learn how to embrace new buying behaviors and align with them.

TS leaves behind no relatives, rather innumerable buyers that feel they were manipulated or taken advantage of by traditional sellers and their tactics. In lieu of flowers, contributions can be made to the AAB (Association of Abused Buyers).