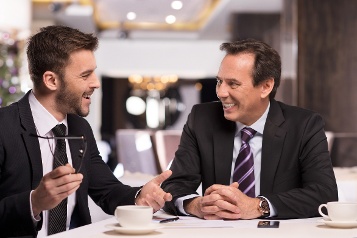 Shortly after launching the company we had an opportunity with a large account that ultimately narrowed their short list to CustomerCentric Selling® and another competitor. The two most influential members of the buying committee were the SVP of WW Sales and the Manager of Sales Training. Looking at the org chart, many sellers would have assumed the SVP was the decision maker.

While we had access to the SVP he, like many senior executives, left a detailed analysis of both vendors to his Manager of Training, who attended one of our public workshops to assess our offering. Our competitor consistently tried to call on the SVP whom they had met with. While at times successful this tact wound up alienating the Manager. As you’d suspect, we ultimately won the business, but later asked exactly how the decision was made.

It’s important to know that both primary contacts had been in their jobs for more than 5 years. The manager had rolled out several successful programs and enjoyed a good working relationship with the SVP. When finalizing the decision, the Training Manager presented his summary of both programs and made the recommendation to choose CCS®. Probably the biggest concern was that we had been in business for less than a year. As it turns out, the SVP had confidence in the Training Manager and effectively “rubber stamped” the decision.

There are many instances where sellers assume the highest person in the org chart will be the decision maker. As with most things related to selling, this can be a dangerous assumption. We would end up reading the situation correctly, but consider how different the decision making process would have been if some things had been different:

Studies show that senior executives typically like to get involved early and late in buying cycles. That said, when senior executives are involved in making vendor decisions it’s hard to predict whether they will actively participate or passively accept the recommendation of people reporting to them. In the case cited above, we had commitment in that the manager took 3-1/2 days to attend our program and we had access early access to the SVP.

A good way to gain insights is to revisit how decisions got made after the implementation has been completed. I suspect you’ll discover that fairly often the person signing the agreement was not the decision maker.